I wrote a blog a while back about instagrams mind fuckness. How we look at what people CHOOSE to show us, the cringe captions they write to go with them & then decide their lives are sooooo much better than ours.

But this topic is specifically about ‘insta mums’ and how we think they’re Iceland’s Mum of year because of their posts.

So obviously I’m the maker and owner of children. So I follow plenty of ‘insta mums’ and as I post about #MumLife. I’m an insta mum as well. Which is all gravy. Now, the main purpose of this blog, is to say DON’T BELIEVE EVERYTHING YOU SEE! And don’t make yourself feel like shite because you’re comparing yourself against someone else. As I said in my previous blog on the subject, I look at all my feed with common sense, especially when it comes to other mums. If I didn’t, I would honestly feel like shit!

So when I’m seeing these posts, I HAVE to actually tell myself that they all have shit as well! That they must shout at their kids as well! They must lose their temper and then feel guilty. They must grab their child by the arm, dragging them along the ground 😱 possibly resulting in a dislocated shoulder. They must find bath time a fucking chore! And end up shouting about the kids splashing all the water out of the bath, covering the floor. So finding the towel that you use as a bath mat, to wipe it up for the millionth time! They must start reading the book, their perfect child has chosen, and then get the hump with said child, as they turn the fucking page that you haven’t finished reading! So you end up saying ‘I’m not fucking reading it then’. They must threaten to punch their kids head in, if he kicks the back of the drivers seat one more time! THEY MUST.

But they don’t tell you any of that shit. And obviously that’s their choice! BUT it’s a mind fuck, even to people that are quite confident and strong minded in their parenting abilities. Now, without sounding wankey, I know I’m a good mum! As are 99% of mums, yet some question this about themselves. Even when I’ve had the most dog shit of days, reacted at every single thing the boys have done. I still speak to myself out loud, saying it’s ok! Its ok, to lose my temper, it’s ok to shout at them. It’s not ideal 😩BUT it’s life. And sometimes life is a bit shit. As much as I’d love to let Maximus, Bear & eventually Winston do whatever they want, that’s not real life.

First off, they’re happy. So that’s a win straight off. They’re clean, most of the time. I feed them. I spend time with them, I take them out. They live their best lives!!! So, for me, I’m doing a good job.

You see posts, about a family having the best holiday! And you get jealous! You start hating your husband/partner/baby daddy for something they haven’t done 😂 You think that you’re the shittest family, all because of someone’s holiday photos. A photo of dad building sandcastles with the kids, a photo of them out for dinner in their best clothes, drinking cocktails, the kids are using cutlery, they’re not eating chicken nuggets/sausages and chips!! BUT let’s get real, first of all, I know that I take untold photos of the baby daddy and the kids! Mainly because it’s a miracle that he’s doing something 😎 But really for memories! So when they get older, these photos exist. So I’m sure these other baby daddies aren’t building sandcastles for hours on end! We all go out for dinner, we all get dressed up for holiday dinners, everyone has ‘the cocktail’ photo. We’ve all ordered the most over the top looking cocktail, which tastes like shit, so don’t drink. Then get the hump about paying the £15 for it! It’s the Instagram life we lead now 😬And their kids aren’t eating the dinner and they still get their ice cream 😂 despite all the shit we tell them ‘well if you don’t eat it, you won’t get ice cream! Bear will, but you wont’ 🙄

You see some new mum, looking all size 8, no tummy and hate yourself. And listen, I post photos of myself looking all fly for a white guy 💃🏻 BUT it’s all an optical illusion! And I feel like I’m straight up with people! First of all, any photo I’m putting up, IS MY BEST PHOTO out of 100 I’ve taken! I have make up on, I’ve worn something other than tracksuit bottoms and a baggy top! And as always! I’ve been able to hide 3 pregnancies on instagram! With Maximus I was still taking selfies right up until I had him! Now I know a few people guessed but know one ever said It to me. And again with Bear & Winston! So if this doesn’t tell you how misleading a photo is, I don’t know what will!!!!! I would never want to put ANYTHING up and make someone feel like shite because of it! So that’s why I’m honest about everything. 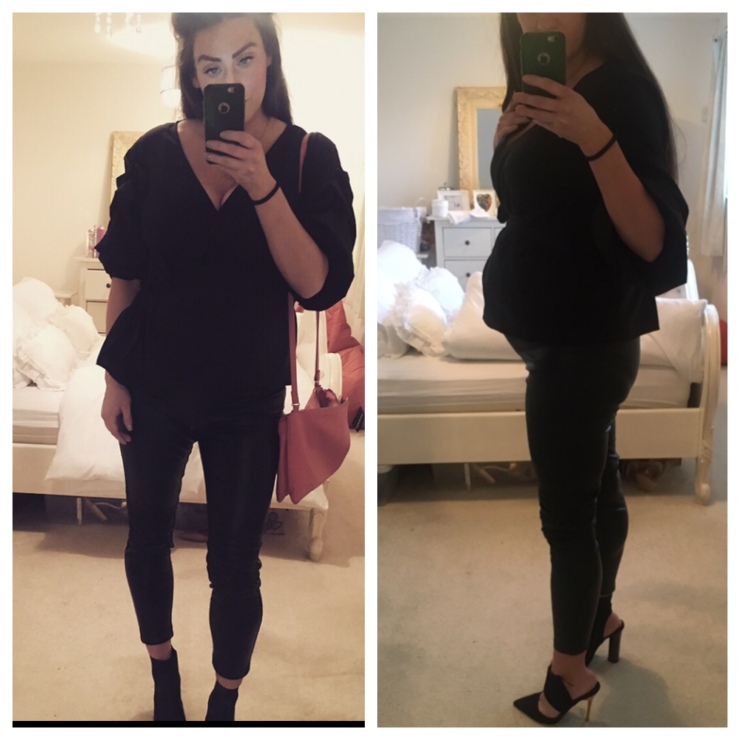 Also, one of my pet hates at the moment, are BUMP photos. I feel as though it’s the fashionable thing to have a tiny bump! So all these people putting up their 6month bump photo, with NO FUCKING bump. Alright mate! Now I know there’s always exceptions, some people will have tiny bumps! BUT let’s be real, most people will have a bump! You have a baby growing inside of you. I swear they’re putting up photos from earlier in their pregnancy, 😊My point being, when you’re looking at these posts! Be realistic, don’t just take it for what you see! Because that means nothing on instagram! When I looked in the mirror this morning, I was like WOAHHHH. My skin is shit, because I’ve eaten nothing but 6 crunchies every day for over a week and drunk all the Coca Cola I can! My eyebrows are OUT OF THIS WORLD! My hair is just shoved on top of my head. And then I see some well turned out mum on there and could feel like shit because of it. But then I had a word with myself, my eyebrows are out of this world because I can’t get a fucking appointment at the same time, that someone can watch my children! My hairs shit because I decided to be a martyr and cut it all off for charity 🙄

The only ‘high maintenance’ thing about me, is my nails. And that’s only because my sister in law does them for me. So it doesn’t matter that all the kids are there, opening her nail box 😱 pulling apart all her colour wheel 😬 Or that I have Maximus jumping all over me, so jogging my hand, so that she has to redo the nail 😩

And whilst I hammer on about being realistic when you’re looking at peoples shit. I wish, these people would be more HONEST. That they’d tell you about the dog shit, instead of making out their mum of the year 😱 Be upfront that they have untold support or help, so it’s easy for them to flounce off and get their nails or hair done. Which in turn has given them time away from the cherubs 😎 So they then feel a little less stressed! So they will have more patience in dealing with the kids!!

That why Luisa Zuissman is my absolute fave mum on instagram, she keeps it totally real! She’s not making out, she has all 3 kids tied to her whilst she’s trying to decorate a summer house! Or make out that she’s had the best holiday with her kids, that she kept them entertained for the whole holiday by herself! No, she is upfront about having her mum to help, that she has a nanny! It makes you feel better! So you don’t feel like, she knows something you don’t know, about getting more hours out of the day! So bravo her. it’s all relative as well, everyone has shit, regardless of their circumstances! So it’s not saying anyone has anything easier than anyone else. Because we all have problems to deal with.

But let’s be responsible for our own mental health! And not allow ourselves to feel ‘low’ about snippet of someone’s best bit! And In turn, be kind to others! Love thy neighbour and all that jazz. Be upfront every now and then.

View all posts by alabamalola